A simple work – a simple rest –a Bible to read. Simplicity. 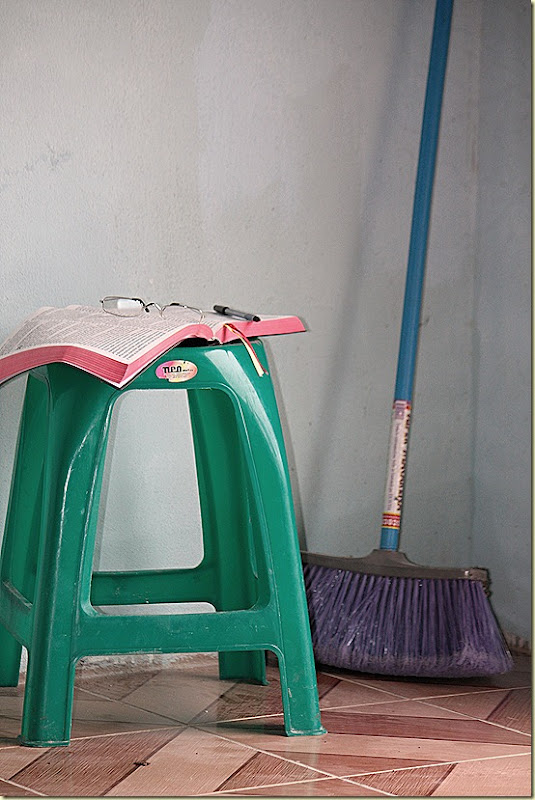 …traveling through life on two wheels…

I was young, single, and without a care in the world. It is true, with but one exception, that I am very much the same as I was then. The exception is that I now live dangerously on the knife edge of a teetering precipice, and life is anything but carefree.

The precipice to which I refer is a metal contraption that balances upon two slender brand-name tires. Some people mistake this terrifying animal for a harmless bicycle –but no! On the contrary it is a beast in bicycle’s clothing. From its mouth comes a roar and smoke issues forth from its hindquarters and it lurches without warning in three different directions at once.

It’s really is a tiger –it even has teeth. But we know it as a dirtbike.

Let me tell you of my first encounter with this factory of humbleness:

It was a dark night. I was hungry. Granted, this isn’t abnormal. But this occasion was different because I was residing in a town that had a restaurant that served some very tasty Mexican tacos. My friend, Andy, was the one who suggested the idea in the first place. He’s also the one who suggested we take dirtbikes.

The dirtbike that night fooled me with its sheep’s clothing, and I decided to give it a try. How hard could it be to not peddle? Just steer. Nothing to it.

I explained to Sir Andy my lack of knowledge when it came to dirtbikes –but he assured me that there was nothing to it.

“Well…sure” I say without too much conviction. I had already heard the horror stories of grown adult men who had used the front brake and came out of the aftermath held together with only pins and screws. I wasn’t about ready to touch that front brake.

After successfully kick starting the bike I slowly let out the clutch lever and engaged the drive chain.

My success at throttling enough and letting out the clutch wasn’t great that first try. Stall.

I again successfully kick start the bike. This time I throttle too high and let out the clutch too quick. I lurched five feet forwards.

Sigh. I had stalled again. I’d also moved five feet towards a vehicle that was now only ten feet away instead of fifteen. I decided that I’d better get out on the main drag before I tried again –after all I didn’t want to hit a car. The next time I had a good forty-feet before the first car.

Once again I kick start the bike –throttle up while letting off the clutch. Pefect!

Finally I was rolling! Cheers! But my, that forty-feet is disappearing waay to quick. I must be in second gear!

“ Clutch!!” I got that once since I was already squeezing or pushing every lever on the bike. That included me pulling and squeezing quite a few things that weren’t levers. My brain frantically tried to multi-task and my fingers and toes did some amazing things in that two seconds…

Nathan is doing French push-ups on the trunk of a car. The bike is French-fried. Everyone else is making soft French noises.

Of course all the shattering and clattering made quite a ruckus and all the fine people from that mission came rushing outside –most of them single young ladies. I try to chuckle. Heh, heh, it’s just a joke guys. No harm done. Okay, you can go inside now. Forget you saw me car hugging. Forget the glass, the bike on its side.

Physically I was fine. But otherwise I was morgified. What kind of dunce am I?  I’ve got miles of open hedge and buildings to run into, but no –I have to hit the car. Sigh.

That was my first experience with a dirtbike –and at that moment I hoped that it would be my last. But it wasn’t. …